Deutsche Bahn AG is building a second subway line, forty meters below the city of Munich. The huge construction site is located in the middle of the city. With this project they intend to expand the infrastructure in Munich and the surrounding area. Preparatory work began in 2017.

For several years, excavations took place to expand the underground tunnels for railroad lines and stations. So far, thousands of tons of excavated earth is brought in, and a large number of large storage boxes made of concrete blocks was needed for the temporary storage.

At the beginning of the construction project, concrete blocks were poured on site and then built up. After 3 years, it turned out that a large part of these blocks was heavily damaged and had to be replaced, at the request of Deutsche Bahn AG.

On behalf of subcontractor Geiger GmbH from Waltenhofen, Legioblock supplied stackable concrete blocks to replace the damaged concrete blocks. The Legioblock system is CE certified and has design approval from the DIBT. In February 2022, the new storage boxes were completed as planned, after a 3-month construction period. 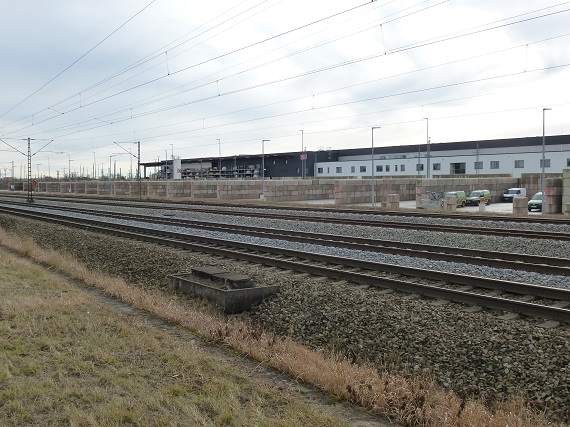 The construction site for the storage boxes is asphalted and has a different slope in many places to allow liquids such as rainwater to drain away properly. Due to the slope of the asphalt surface, the construction and assembly of the individual walls was very complex and the integration of the partitions into the back wall was impossible in many places.

In order to calculate the stability and tilt resistance of the individual walls, the Legioblock team, together with the structural engineers of Deutsche Bahn, prepared a structural calculation.

A team from Geiger GmbH installed the new storage boxes under the direction and supervision of an authorized Legioblock employee. Deutsche Bahn AG has already approved the constructed walls. Legioblock was able to provide advice from the start and therefore could offer a complete solution for this major construction project in Munich.

Would you like to know more about this project or our products and services? Please feel free to contact us.